The Construction Products Regulation (CPR) refers to the CE marking of cables.

This regulation has existed for over 15 years, but has not imposed any requirements on copper and fiber optic cables so far.

Transitional period until 1 July 2017
The testing standards for all EU member states were now ratified and announced in the official journal of the EU (305/2011) in February 2016. The regulation itself entered into force on July 1, 2016, but it is granted coexistence until July 1, 2017. During this period, untested products can continue to be sold and installed - meanwhile, manufacturers are required to test the cables and classify them according to the new standard.

Until July 1, 2017, all products affected by the new regulation must then be checked and marked accordingly.

What is Changing with the New Construction Products Regulation (CPR)?
The major change in the specifications is the replacement of the fire protection class IEC 60332 by a series of Euro classes (Aca - Fca). Where Aca is the strongest and Fca is the weakest flame retardant. The Eca and B2ca classes have come into focus because they contain most of the changes in terminology and the specification requirements. The Eca class corresponds to the existing IEC 60332-1. The class with the currently higher requirements for fire performance IEC 60332-3 lies between the new Euro classes B2ca and Cca.

However, it leans more towards the Cca class.

Do you have any questions?

We will gladly answer any questions you may have about products relating to the EU Construction Products Regulation. 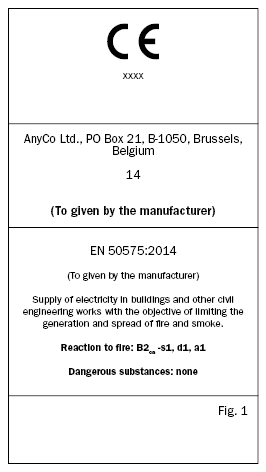 Manufacturer's obligations according
to the EU Construction Products Regulation

The following information is required: 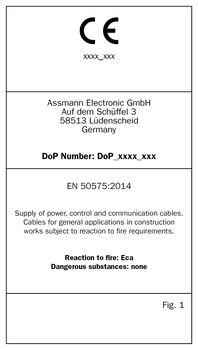 How do I know that a cable is in accordance with the Construction Products Regulation (CPR)?

Each cable has accompanying papers - the so-called DoP documents (Declaration of Performance).

If a cable has CE marking, then the product also has a valid DoP.

The DoP confirms the performance for the respective product and the fire properties.

An installation cable with CE marking without an associated DoP is not compliant!

With the introduction of CE marking for laying cables, the European Union has allowed the products to be compared with regard to fire properties, since the cables are classified, documented and certified by "notified bodies" - accredited testing bodies.

Do I get DIGITUS® Cables in Accordance with the EU Construction Products Regulation (CPR)?

You will receive DIGITUS® cables that comply with the current European Construction Products Ordinance (Regulation (EU) No. 305/2011 // EN 50575).At this point, we provide you with comprehensive information on the new guidelines for fire protection.

We will gladly advise you on your project and offer you a tailor-made solution for your effort.

Which Cables are Covered by the Construction Products Regulation (CPR)?

CE markings must be affixed on copper and fiber optic installation cables according to law. CE marking does not necessarily have to be carried out on the cable, but nevertheless in the form of a sticker on the packaging materials such as the cardboard box and the cable drum. CE marking on patch cables is not necessary, since patch cables are not regarded as "permanently laid" cables.

The Construction Products Regulation refers "only" to the "permanently laid/installed infrastructure", thus it does not contain any connection components or patch cables and also any compact modules. However, it covers all prefabricated solutions, such as fiber optic/copper trunk cables, which are considered to be "permanently installed". These are dependent, however, on the mass cable certification on which the assembly was built.

The new EN 50575 standard includes power, telecommunication and signal cables for general use in construction works. Precisely for this reason, the installation cables currently used are, for example: Copper Cat. 7 S/FTP AWG23/1 – Fiber optic I-DQ (ZN) BH 4 G 50/125µ OM4 are impacted by the regulation because these are "permanently" installed in the building.

Not required, but a common way to identify the cable after its installation.

Who Controls Compliance with the Construction Products Regulation (CPR)?

A requirement of the new Euro classes: - Manufacturers of cabling systems are responsible for deciding whether to test the cables themselves or to commission an external company to verify compliance with the standards. This is listed in detail in EN 50575.

Finally, a "notified body" must be commissioned to approve test results. Products cannot be labeled in accordance with the Euro class or be regarded as compliant without the certifying body's confirmation of the test results.

After receiving "notified body" status, it is able to evaluate the customer's test data (manufacturers, cabling system vendors, distributors) and subsequently issue a report and a certificate. It is expected that this certification process will take another two to three weeks.

Are you interested in our white paper on the Construction Products Regulation?

Here you can download the CPR white paper as PDF:

We will gladly inform you about current standards, changes in legislation and new products.